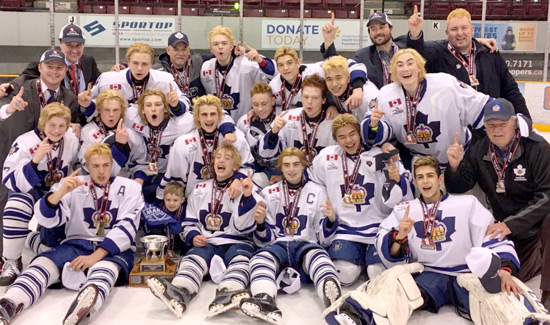 The boys went through the round robin 6-0 out scoring the opposition 40-5. Connor Mackenzie recorded 2 shutouts and the best GAA in the tournament along with the most games played by a goalie and ultimately MVP of the Finals.

The team proved dominate in all aspects of the round robin with the top 4 spots on the points leader board going to the Marlies… Will Cuylle, Stephen Halliday, Reid Valade, and Lleyton Moore.

On Thursday night Will Cuylle was named top scorer with 17 points in six games and Lleyton Moore was named top defencmen with 14 points in 6 games. Special notice to Stephen Halliday who finished 2nd with 16 points and Reid Valade who had the most goals in the round robin with 8 goals in 6 games.

The finals saw the Marlies against YSE and one of the most dynamic forwards in the province in Quinton Byfield. The Marlies coaches  handed Jamie Drysdale the job of shutting down Byfield and he did not disappoint. Byfield for the first time all tournament was held off the game sheet and proved a pivotal point for the Marlies Championship.

Kallway Mercer opened the scoring for the team off a great pass from Eric Russell.

The game was eventually tied by YSE going into the 3rd until a huge slap shot from MacKay Hayes was released off a rush which proved to be the game winning goal.

The 2002 Marlies became the 4th team to ever repeat as Provincial Champions in the tournaments history as they won the Pee Wee Provincials as well 2 years ago.