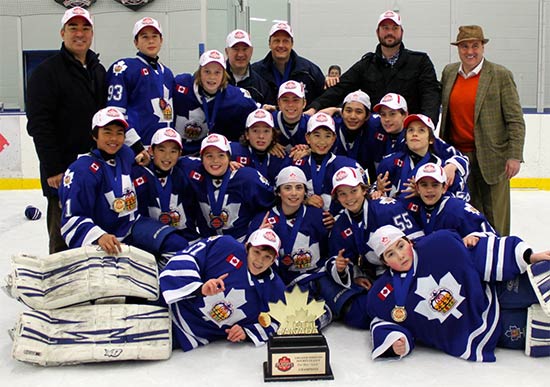 Both the Jr. Canadiens and Marlboros came out tentative during the 1st period.  A lot was on the line.  0-0 after the 1st.  The resulting talk between periods by our coaches seemed to show their motivating powers, the knowledge to analyze the game;  and the desire by the Marlboro players.  Our boys scored two power play goals (Eric Russell had both) and held the Canadiens to one shot… Amazing!!  In the 3rd period the Blue and White suffered a number of penalties.  Three in total, including a one minute 5 on 3.  Goaltender Connor Mackenzie held off the pressure along with his teammates.  The penalty ended and Ryan Alexander put the final goal into the Canadiens net with 6 minutes left.  Final Score, Marlboros 3, Canadiens 0.

A special comment that Connor Mackenzie had back-to-back shutouts leading to the Championship and Jamie Drysdale assisted on all three Marlboro goals.

Good Luck at the OHF Finals!! See you there!!