The organization is very proud of our Minor Bantam team for their success in the prestigious North American Silver Stick Tournament Finals. Throughout history the Marlboro Organization has won at this level 4 times…quite an accomplishment. The team had to accomplish this Championship with some regulars out of the line up and from support from under age players…thank you players and parents for your contribution as under-agers. 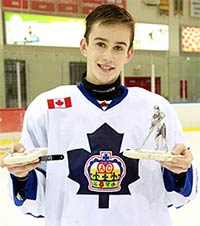 Having moved through the round-robin with a 3-0-1 record, our team met some very top-ranked teams in North America especially the Ottawa Senators in the ¼ Finals who they defeated 4-1. In the semis the host Whitby Wildcats and Marlboros fought hard. It was a great defensive effort with Marlboros earning the shutout, 3-0. As the team went on into the final, the Chicago Mission, a top-ranked North American team wanted bragging rights. An early 5 on 3 to Mission’s advantage in the first period put our team down, 1-0. The second period was all Marlboros and we evened the score at 1-1. After a scoreless third period it was off to overtime. A shot from the point off a Marlboro stick found an opening and went into the net. Final Score and a Silver Stick Championship, Marlboros 2-Mission 1.